Shopify vs Squarespace In 2021: Which One Is Better? 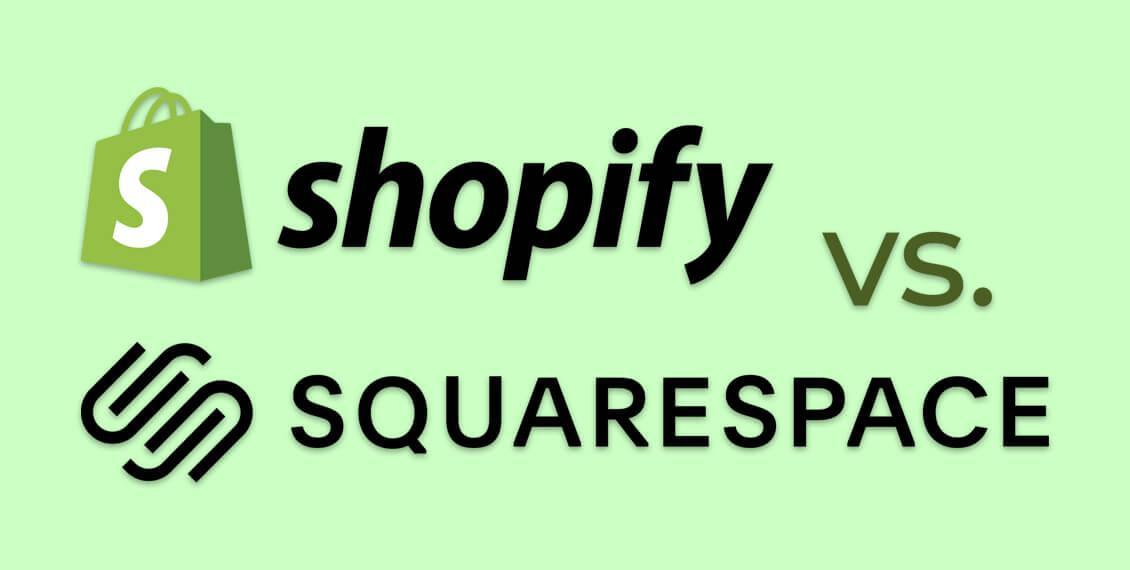 Shopify remains the default recommendation for so many people in the ecommerce industry.

It’s convenient, intuitive, scalable, well-supported, and offers a powerhouse combination of native features and expandability through the superb Shopify App Store. But it isn’t the best option for everyone, and there are more strong competitors than ever before.

Squarespace, meanwhile, has picked up a lot of buzz through strong marketing, and it’s already carved out a decent piece of the ecommerce pie despite not fundamentally being intended for online retail. It’s a low-cost, all-purpose website-building solution that generates slick and visually-arresting layouts with minimal effort, making it great for beginners.

Here, then, we have a competition with no clear loser. Anyone looking to create an ecommerce store would do well to pick either of these platforms. Each one covers all the basics and can capably do everything the average merchant would need it to do.

But if you’re going to commit your time, energy and financial resources to building a store, you don’t want something that’s merely good enough. You want the best ecommerce platform you can find — so why would you pick the runner-up?

In this comparison, we’re going to pit Squarespace against Shopify in the ecommerce arena to see which one is the better option for you. Is there a clear answer to the titular question, or are things somewhat more complicated? Shopify vs Squarespace, pros and cons: let’s find out.

It’s typical for an ecommerce platform to offer more than one level of service, so how do these huge brands frame their online retail solutions? We’ll start with Shopify since it has the most interesting range of options by a significant margin.

There are essentially three categories for these five pricing tiers:

Shopify Lite doesn’t actually produce a Shopify store. Skipping the website builder, it allows you to use the Shopify back-end to add basic buying functionality to a non-Shopify store. If you already have a website and want to casually monetize it (or want to establish a point-of-sale setup with no online store), this is a solid way to make that happen (and it’s cheap at just $9 per month).

Shopify is the tier aimed at the average ecommerce entrepreneur. It provides a fully-operational Shopify store, and will likely suffice unless (or until) you grow your store to the enterprise level. Note that the Basic and Advanced tiers pertain to things like reporting and payment (the higher the tier, the better the options, and the lower the transaction fees), but don’t change the game.

Shopify Plus, starting at $2000 per month, is the smart choice for big businesses that can justify its weighty price tag. It brings out the full force of the Shopify platform, leaving no features in reserve and enabling the kind of rich customization needed for enterprise selling.

Things are much simpler for Squarespace, because there are only three tiers with the features necessary to run a functional ecommerce store:

Business technically needs to be included because it has integrated ecommerce functionality, but it isn’t a strong recommendation because it doesn’t provide in-domain checkout processes. To buy from your store, a shopper would need to be sent elsewhere to pay for their order. That isn’t very convenient and it makes a brand look sloppy and unprofessional.

Basic Commerce covers the gaps left by the cheaper tier, adding a native checkout process and doing other useful things like supporting user accounts and providing enhanced analytics. If you don’t need anything too sophisticated for your store, this tier will be the right choice.

Advanced Commerce bumps up the features once again, allowing sellers to offer subscriptions in addition to products (very useful if you want to sell training courses, for instance), set up abandoned cart emails to improve conversions, and even build custom integrations.

Shopify was built from the outset to do just one thing: sell online. This is reflected in its range of features and in its industry-leading App Store. Whatever you want to do to boost your ecommerce business (whether it involves marketing, conversion-rate optimization, or social media engagement), you can find the functions to help you do it.

Squarespace, on the other hand, wasn’t developed for ecommerce. That functionality was added later. This doesn’t mean that it’s incapable when it comes to online retail, but it does mean that you can’t expect the kind of focus you’d get from Shopify.

Just look at how the range of Squarespace extensions fares. At the time of writing, there were just 24 extensions with official support (plus a handful of Premium integrations limited to the Business tier and above). If you want to use an email manager other than Mailchimp, such as Constant Contact, you’ll need to use Zapier or configure it manually.

In Shopify, you can just use the official Constant Contact app. This makes life so much easier, and gives you a huge range of freedom when it comes to the business software you use. Squarespace and Shopify are both competent here, but when it comes to making an online store, Shopify is the clear winner.

Unless you’re using Shopify Lite, you’re going to be using your chosen platform to design your ecommerce store — and you want that process to be as productive as possible. So how do Shopify and Squarespace compare when it comes to design?

Well, Shopify has always been great at simplifying the ecommerce process. You can get an online store built very quickly and easily, taking advantage of free templates that look solid, allow reasonable customization of design elements, and work well on all devices. With that said, you can’t usually do that much to rearrange those themes. They’ll have set structural patterns.

Squarespace grants much more freedom through its focus on drag and drop block-based building. You can freely add, remove or rearrange all your on-page elements. This allows you to create the exact layout you want, all without doing anything more complicated than you’d need to do in Shopify. It also has far more themes to pick from. Due to this, I have to give the nod to Squarespace here.

A good ecommerce site needs to load quickly and consistently — and to rank well in Google’s SERPs, it also needs to cover various other SEO basics (such as featuring page metadata). There’s no sense in creating an attractive store if it can’t handle a lot of traffic, or can’t attract it in the first place because technical issues prevent it from competing for search rankings.

Put simply, Shopify has the edge in almost every regard here. Squarespace offers marginally more flexibility in some ways (when it comes to custom URLs, for instance), but Shopify has the kind of grip on ecommerce demands that you’d expect from a service built for online retail. It makes technical SEO elements clearer, generates decent metadata, and — very notably — will continue to be updated whenever useful with a retail-first approach.

There’s nothing much wrong with Squarespace here, and you certainly can create a Squarespace store with strong ranking potential. If you’re an ambitious business owner looking to maximize your chances of competing for top keywords, though, Shopify is the obvious choice.

Every hosted ecommerce service needs excellent support options. If you encounter a major issue with your site at a particularly-inconvenient time, it can cost you immensely. Making a good platform choice will allow you to proceed with absolute confidence that the developer will have your back when things go wrong (particularly vital if you’re a beginner).

Shopify is known in the ecommerce world for its industry-leading support service, and you can find glowing endorsements wherever you look. Whether you want to log a support ticket, send an email, reach out via social media, or even place a phone call, the Shopify support team is there to accommodate — and it’s even available on a 24/7 basis.

Throw in the weight of ecommerce advice Shopify provides through its blog and knowledge base, and you have a range of support options that ticks all the boxes.

But that doesn’t mean that Squarespace is a slouch in this area. Feedback is comparably positive, with the Squarespace support team being reliably communicative and helpful. Live chat is available during regular business hours, and email support is available 24/7.

There’s no phone support, though, and the range of instructional materials isn’t as expansive (though there are plenty of help guides and webinars to choose from). You can’t go wrong with either support service, but if you have to pick one, Shopify is the way to go.

Shopify vs Squarespace: our verdict

Having looked at some of the key concerns for prospective ecommerce sellers, we can now reach a verdict. Shopify vs Squarespace, Squarespace vs Shopify… which should you choose?

Well, though it depends on your specific circumstances, the rational answer is Shopify.

Squarespace is a fantastic platform for sites of all kinds, offering superb versatility with a great aesthetic and enough features to assemble a custom store that looks outstanding. If looks are key for you (if you’re planning to sell luxury items, perhaps), choosing Squarespace will allow you to punch above your weight with your general store design.

But Shopify is too strong in too many areas to get second place here. It’s a commonplace recommendation for good reason. It offers an exceptional range of ecommerce features, top-class support, and an intuitive design approach that allows enough room for variation without overwhelming beginners.

And when you factor in the strength of the Shopify App Store, it’s priced very competitively, with its Basic Shopify tier comparing favourably to the Advanced Commerce tier of Squarespace. Shopify or Squarespace? When in doubt, give the win to Shopify.

Should you look at alternatives?

We’ve only looked at Shopify and Squarespace here, and there are many more ecommerce platforms on the market. If neither of these systems covers all your needs, then, should you look elsewhere? Absolutely! The more research you can do, the better prepared you’ll be to make an informed decision, and the happier you’ll be with the results.

This guide is all about settling things between two particular systems, helping you proceed if you’ve already whittled your options down. If you’re curious about systems like Magento or WooCommerce, check out our other reviews. Good luck!

Is The Ecommerce Subscription Model The Future Of Online Retail?

What Is The Best CRM For Small Businesses In 2021?

Previous Post What Is Shop Pay? Assessing Its Features, Benefits And Uses Next Post How to Make Sure You’re Setting Fair Prices